4 Misconceptions that You Probably Have About Bidets

by Aaron Gruenke at May 16, 2018 in Health
Comments are closed

One of the major and most prominent cultural differences which separates the Eastern world from the Western world lies in how we wash after pooping! Comical as it is, this is a fact that anyone from either part of the world realizes all too well after traveling to the other. However, most doctors agree that washing off after pooping is a much more hygienic option, as compared to wiping with toilet paper, and people all around the globe are slowly starting to shift to bidet toilet seats. In case you are not entirely sure about installing a bidet toilet seat yet, check out the following misconceptions that people often have about them to clear all your doubts.

Thanks largely to movies and TV shows, a lot of people in the west have the misconception that the water jet in a bidet is a messy affair that might get them soaked. In truth, the good ones will always let you control the water pressure and even the cheaper seats that do not come with water pressure control will never have a jet that’s strong enough to soak anything but the area which you are trying to clean.

Cold Splash in the Sensitive Regions

If it’s freezing outside, then the last thing you would want would be to splash your nether regions with cold water, and quite understandably! However, bidets here generally come with temperature settings as well, so instead of the water being a cold splash of harsh assault, it can be a soothing flow of warmth. Also, some of the better models come with an inbuilt dryer to dry off your privates immediately after the wash.

Bidets are for Women

In truth, they are exceptionally helpful for women while they are trying to maintain their hygiene during menstruation and pregnancy, but that does not in any way make a bidet seat any less useful for men either. The fact that the water jet is able to actually and completely clean off all fecal matter after a bowel movement is beneficial to everyone, irrespective of the gender. 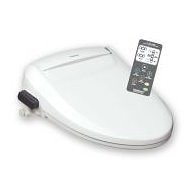 Bidet Washlet, Add bidet features to any toilet by changing the seat

Bidets Need a Separate Space to be Installed

As we are talking about bidet seats and not traditional bidets, which were separate installments adjacent to the actual commode, this is a moot point really. A bidet seat only replaces the toilet seat you already have and, therefore, it does not take up any extra space at all. As an alternative, you can also opt for a handheld bidet sprayer as well, which basically eliminates the need to install a new bidet toilet seat.

As you can see, almost all of the reasons that hold people off from installing a bidet seat at their homes are not relevant at all, so the next step is to find the right bidet toilet seat for your bathroom. Simpletoilet.Com can help you with that and much more, as it’s a superb source for guidance and reviews on all types of bathroom fittings.

In general, though, it’s always a good idea to choose a bidet that lets you control the water pressure from the cleaning jet.

Contributed by:  Beauty Saunas and Baths foremost experts in Bidets and other bathroom fixtures